Nature has always been part of Joe Toolan’s story. As Manager of Chesapeake Bay Programs at National Fish and Wildlife Foundation, Toolan helps local communities clean up and restore their polluted rivers and streams.

But his first connection to nature was exploring the banks of the Chesapeake Bay as a child. Spending summers looking for fish and learning to pick crabs, the Chesapeake embraced Toolan, a Queer person of color, without judgement.

“Nature was one of the only places I could find myself and be myself safely," Toolan said.

Today, Toolan is unapologetically himself. With green painted nails, a nose ring, and an infectious smile, it’s hard to imagine he was anything but the bubbly conservation and wildlife advocate he is today. For Toolan, getting outside and being on the water was formative to his identity.

However, barriers to outdoor access can be compounded for members of the LGBTQ community and other marginalized communities. Since they often get signals that the outdoors isn’t for them, many community-led organizations have sprung up to identify and address barriers to access and provide welcoming affinity spaces.

Pride Outside: An Invitation to the Outdoors

Pride Outside, a Washington, D.C. based national organization, connects the LGBTQ community around the outdoors and hosts hikes, LGBTQ history tours, outdoor skills courses, and their annual summit. They work on LGBTQ outdoor inclusion initiatives with Congress, federal land management agencies, conservation nonprofits, and the outdoor industry. Pride Outside is a connector, community builder, and barrier breaking organization built for and by the LGBTQ community.

With support from Nature Valley and other ParkVentures supporters, the National Park Foundation is helping fund Pride Outside’s Nature and Nurture series as well as their annual summit. 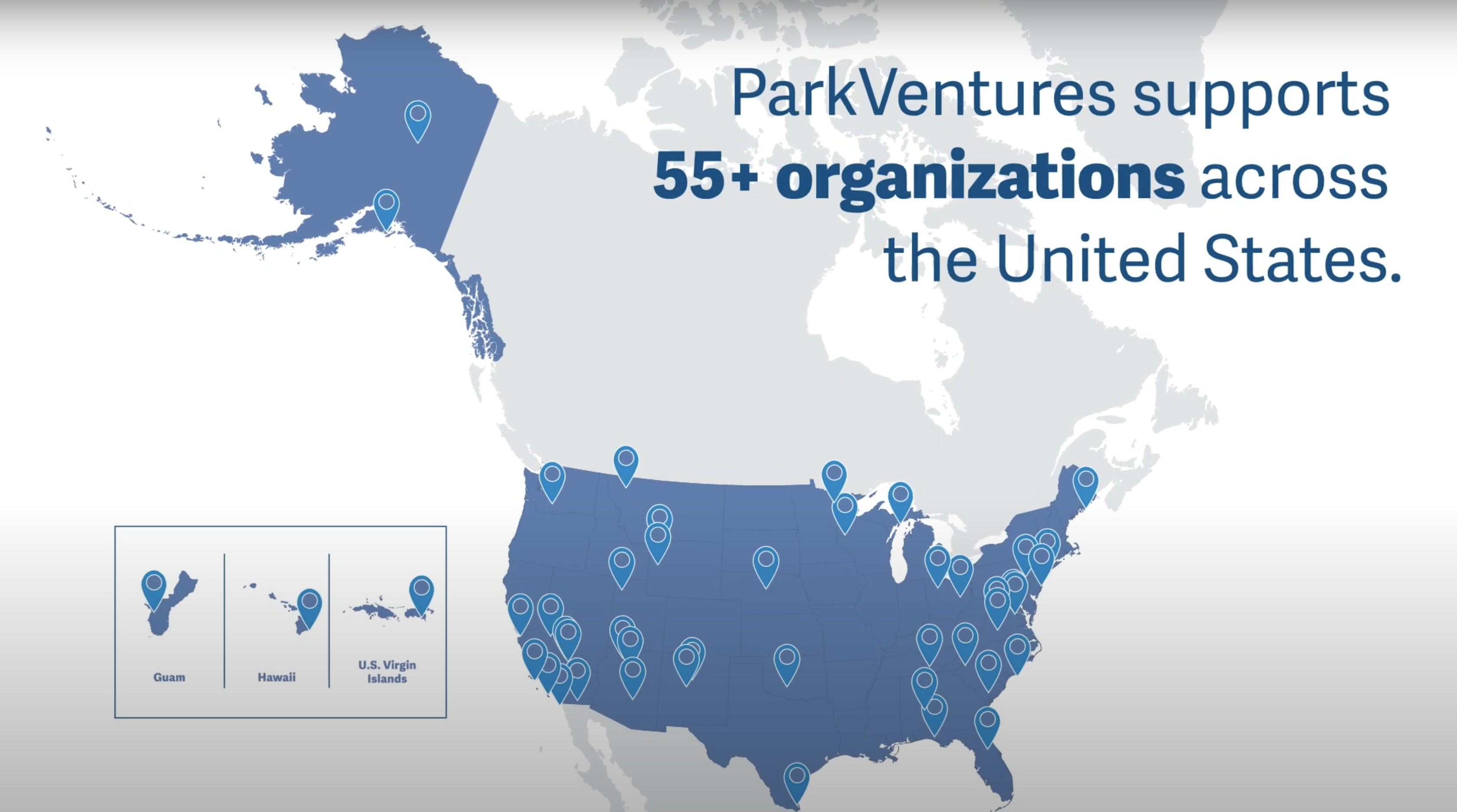 “When I originally conceived of Pride Outside, I was looking to an alternative to happy hour, to give people an invitation to be outdoors in community,” says Hannah Malvin, founder of the organization. “It’s not just for the outdoor obsessed. If you don’t know where to go, what to do, or what to bring, that invitation to a community can be really important.”

Malvin says she started as “an outdoorsy lesbian” interested in using nature to create community. She wanted to support and build on existing work. And Malvin had a vision for national-level work boosting representation and inclusion for the LGBTQ community outdoors.

Her idea materialized in 2017, when Malvin cofounded Pride Outside’s LGBTQ Outdoor Summit with Elyse Rylander, Executive Director of Out There Adventures. The event has since evolved into a 140+ person annual convening of LGBTQ outdoor professionals and enthusiasts.

It was the 2019 summit when Toolan first heard about Pride Outside. A friend of his had attended the last summit and invited Toolan to join.

“As a queer person and person of color, it can be really hard to find spaces, especially in the environmental movement that feel open where people look like me or identify like me,” Toolan said. “Having spaces like that is so important because there are challenges that LGBTQ folks and people of color face in their day-to-day jobs and in the outdoors. Sometimes, it feels like there is no one that you know to talk to about it. The summit connects you with folks that you can network with and talk to about some of the challenges you’re all facing.”

Finding community isn’t all about overcoming barriers, Toolan also says the summit is a place to celebrate identity too. “Being together and finding joy in shared identity has been really, really awesome,” he says. “It’s priceless.”

Our national parks are a place for building LGBTQ community and connections. And they also tell the story of LGBTQ history.

Megan Springate, who has also attended Pride Outside events, was in the middle of her Ph.D. in Historical Archeology at the University of Maryland when she was invited to work with the National Park Service.

As part of that work, Springate created a spreadsheet of places across the country with a tie to LGBTQ history. Many of these places were national parks that tell the stories of LGBTQ movements and pivotal moments, including President's Park, Vicksburg National Military Park, and Stonewall National Monument. Others were places holding the day-to-day stories of LGBTQ individuals and communities across the country.

When Springate’s spreadsheet became so large, she began pinning the sites on a map of the United States.

“Intellectually, I knew Queer history was everywhere,” says Springate. “But when I saw the dots on the map in every state, in all of these communities, it was a real emotional connection that I hadn’t felt before.”

Based on that work, Springate was invited to lead and edit “LGBTQ America: A Theme Study of Lesbian, Gay, Bisexual, Transgender, and Queer History,” a 2016 National Park Foundation publication funded by the Gill Foundation for NPS.

"It wasn’t that long ago that we were having rights stripped away. And there are still those trying to keep us from having rights,” said Springate. “"So, for NPS to support this work and say, we see you, you are actually important, and your stories matter, I and others shed tears of joy."

The sweeping study was purposefully written to be accessible for the general public as well as a useful professional tool for historical preservationists. As Springate writes in the report, “much of LGBTQ history is difficult; it is about loss, violence, struggle, and failure,” but the study also offers insight into the beautiful, complex, and multivocal histories of lesbian, gay, bisexual, transgender, two spirit, and queer people. The aim is to connect these histories to American history broadly and to parks, places, and landscapes in particular.

"To have a history is to exist,” says Springate. “You can create an identity using that history. If there is nothing reflecting you back, then you don’t exist. That's why our histories, telling our history, and preserving our history matters so much.”

The theme study and Malvin’s work with Pride Outside are paving the way for increased representation across our national parks – both in the stories they tell and the individuals who tell them. And NPS continues expanding the number of sites dedicated to the stories of underrepresented communities, while also expanding upon interpretations and storytelling at existing NPS sites.

Work like the “LGBTQ America” theme study and Pride Outside’s programming in national parks is a powerful place for community and affirmation. And both Malvin and Springate say their work is just the beginning. Malvin is leading inclusion trainings for NPS, collaborating on new tools with the NPS LGBTQ Employee Resource Group, and planning the next slate of Pride Outside programming to welcome even more LGBTQ individuals to the outdoors.

“Once you recognize you are part of the LGBTQ community, you go through self-discovery. You’re looking to understand to see who you are, who you’re connected to,” Malvin said. “Parks and the outdoors can be a wonderful, nonjudgmental place to learn about yourself, connect with community, and learn about your history. They're a great place to figure out who you are and where you belong.”

You have the opportunity to help others experience joy and personal growth through outdoor recreation. Help fund NPF’s Outdoor Exploration programs to continue improving access to our national parks. 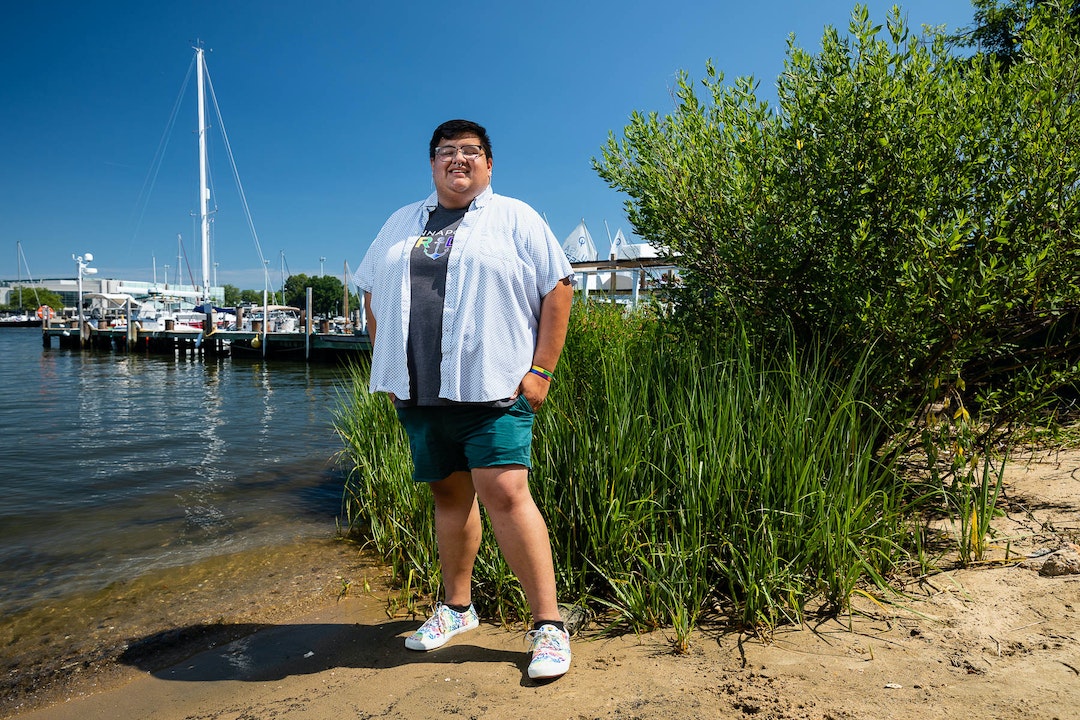 Toolan on his first trip back to his birth country, Panajachel, Guatemala. Maria Elena 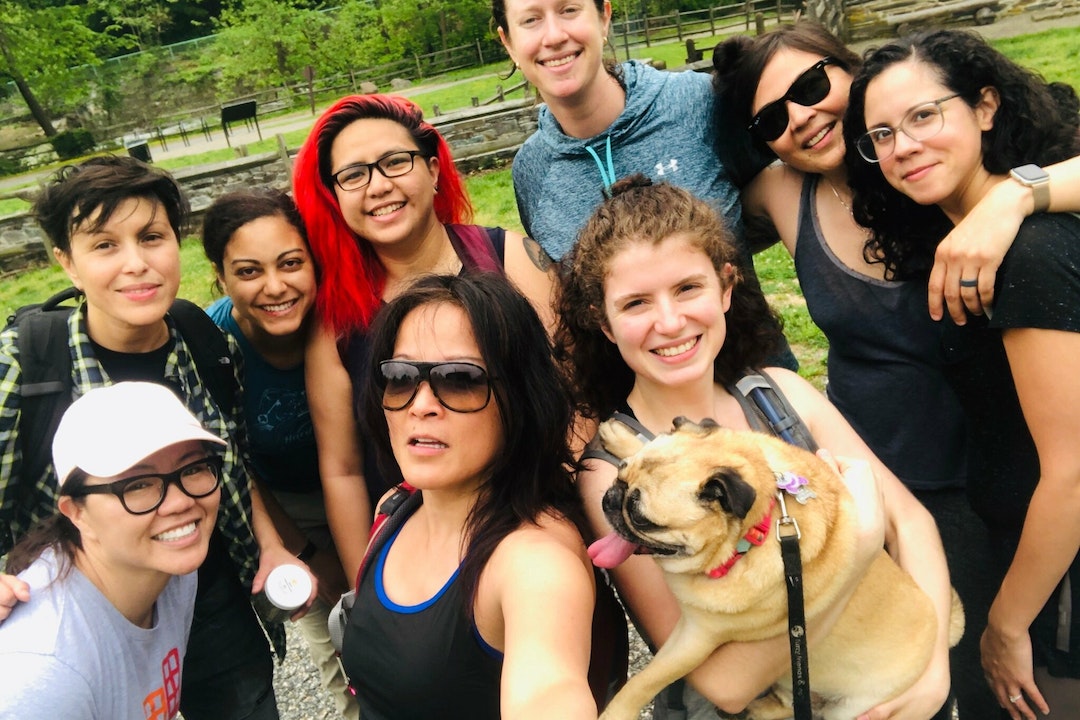 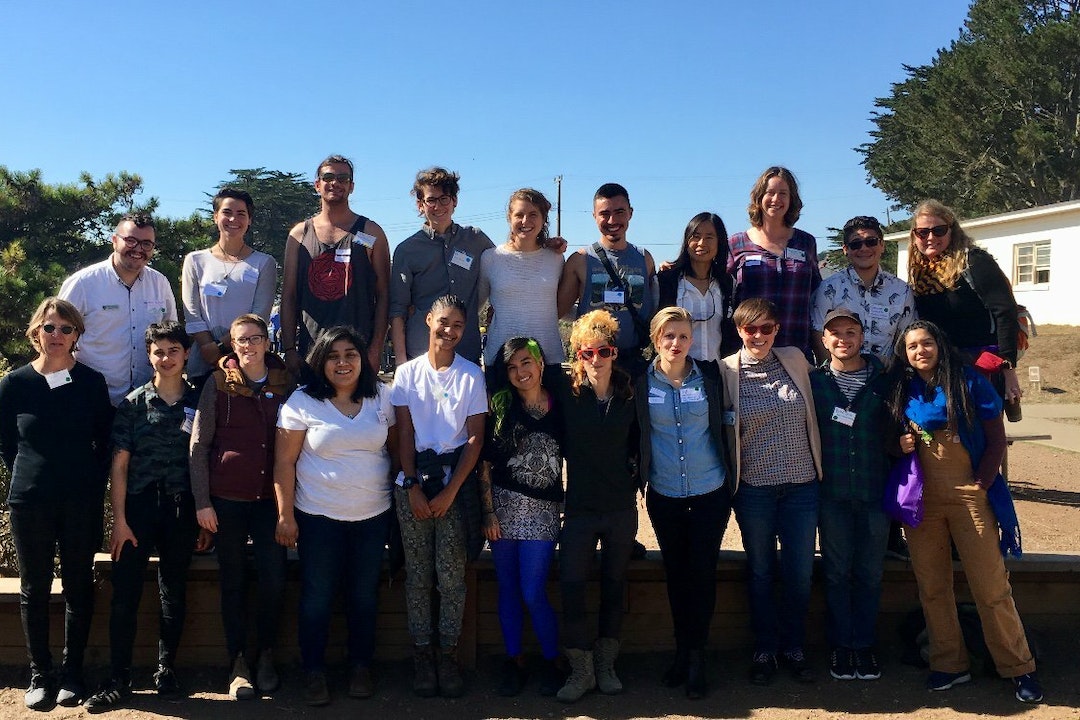 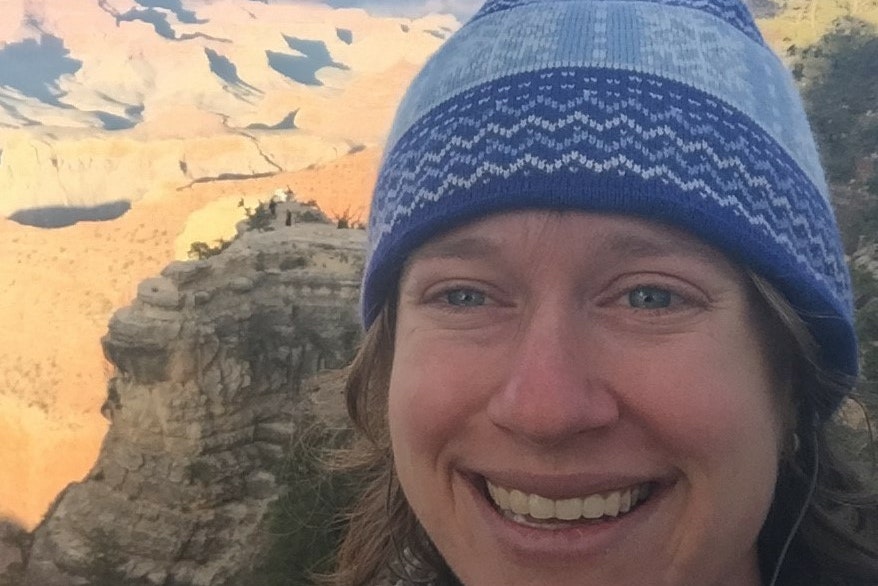 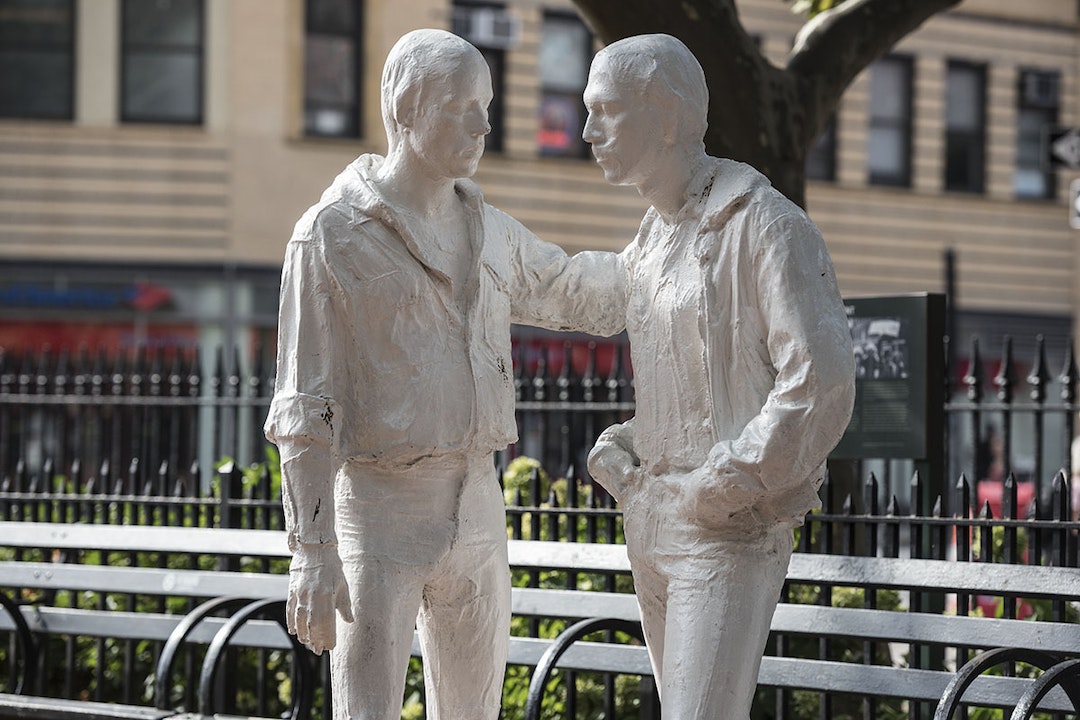 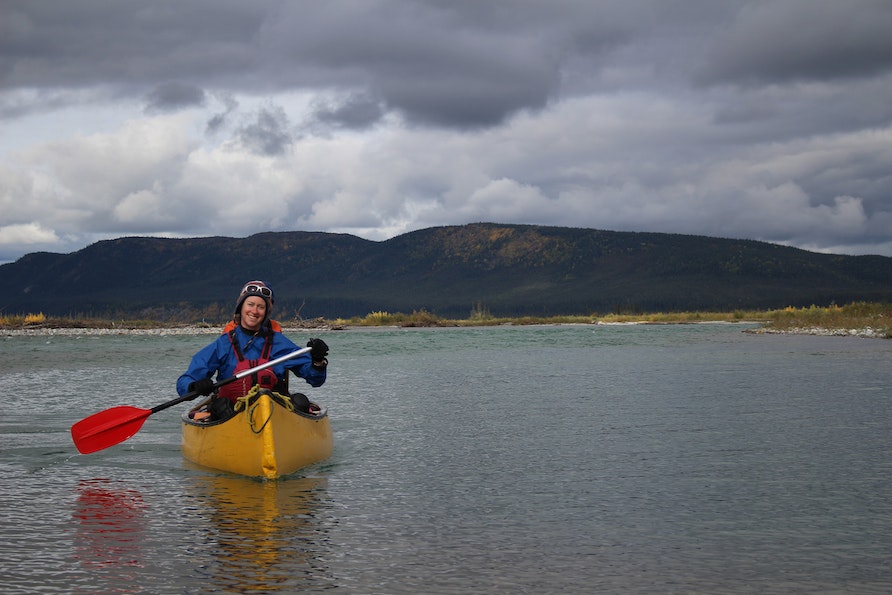