I Carry You with Me

by Janina Edwards
I

I carry my father with me on my adventures.

It tickles me to think of him as I hike or kayak, and go birding. I imagine him in his 40 (or even 60) year old guise, trekking along easily beside me. Pointing out birds by name, trees by type, and flora and fauna galore. 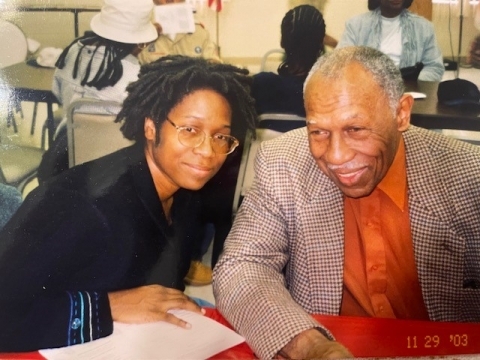 Janina and her dad, Thomas Edwards

I visualize him bursting with excitement when I tell him I am going to kayak 100 miles on the Missouri River to Gateway Arch National Park in honor of York (York was enslaved by William Clark of the Lewis and Clark Expedition and was a member of the Corps of Discovery) with 14 other Black people as part of Outdoor Afro’s Blackpaddle Expedition.

I know he would’ve then gone down to his room in the basement and started researching. (Not a man cave – that is a modern concept. My dad’s space was a rough cluttered utilitarian room in the basement. His books, magazines, and old file cabinets competed for space with the house’s water heater and boiler, tools, and home repair projects.)

A week later and for the rest of the summer before the Missouri trip, Daddy would have called me long distance and regaled me with all the research he’d amassed from his stash of National Geographics going back TOO many years about:

AND for good measure, he would assault my mailbox and send me:

In short, my father would have been delighted.

This man took my brother and I skiing back in the ‘70s. I call it the Raisin in the Sun experience. Three dark skinned dots on white snow-laden hills, surrounded by white people, in Wisconsin. I didn’t see anything odd in this activity back then. That was just what we did. We skied. We went ice skating. We went swimming. We went camping (family style). 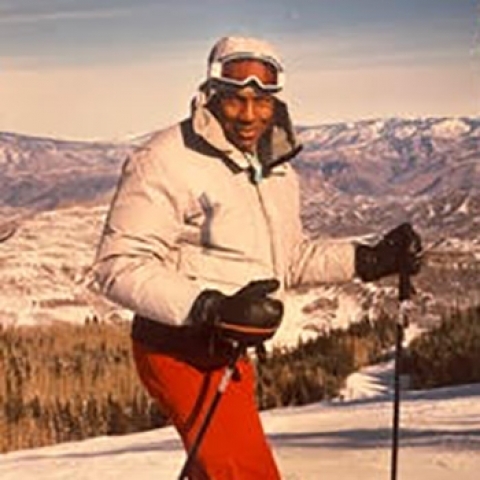 I brought my dad with me to Missouri, in the form of the wallet he carried. Even though he was a man who embraced new things—computers, and the like—he was not a man who let go easily. He was a thrifty man. So, he carried that same wallet every day in his back pocket. Now its brown leather is worn and distressed. Threads still strong, but weathering. A style and design you can only see in a Sears & Roebuck catalogue of the 1980s.

He carried it until its presence no longer mattered in his everyday life.

In a hospital bed, he didn’t need cash, cards, a license, or an office ID.

His wallet went with me to Missouri, and that made me foolishly happy. I smiled every time I took it out of my bag.

During one of our breaks on the river, I went into a Lewis & Clark Museum. (My father would never have passed up a good museum and an opportunity to buy books, and I am his daughter.) I came out with a little York doll I had purchased. That made me happy, too. I’ve been having fun photographing York (this formerly enslaved person from 1863) in different modern places—getting his first Starbucks with a yummy sandwich, getting on an airplane, visiting the Lincoln Memorial. I plan to take him to see Dr. King’s final resting place. It makes my heart happy.

Somehow, I see these two, my dad and York, as becoming great friends–enjoying good foods, exploring, witnessing the world. 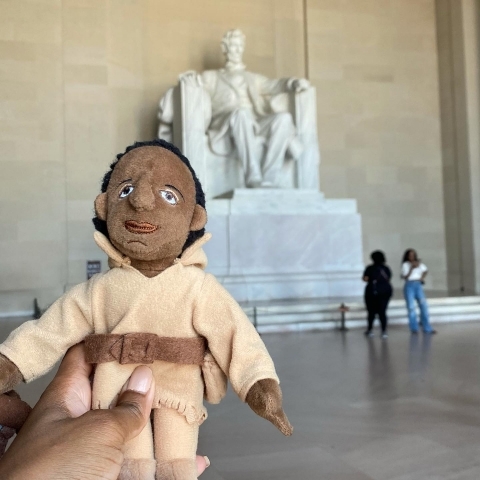 What would York say? Author Janina found a York doll during the expedition

York was reputedly a large, dark-skinned Black man. Some say he was a storyteller. He was trapped by the time in which he lived because of the body he inhabited. A skin color seen as less-than by the age and the world surrounding him. Though he had seen and experienced adventures good and bad, tragic and comic, resplendent and mediocre, in the Corps of Discovery, but ultimately his skin, his body, imprisoned him. We don’t know for certain about his fate. However, from William Clark’s reported conversations, York was never the same biddable servant after “Discovery.” He wanted to be free.

My father, my sire in adventure, fell victim to his body, too, at the end. When legs no longer stand and walk, minds no longer follow a linear line, there is no freedom. At the nursing home, my dad repeatedly crawled over the side rails of the hospital bed. He did it so much the staff lowered his bed and put pads on either side so that he wouldn’t hurt himself if, and when, he succeeded in his nightly escape attempts. He wanted to be free.

In my imagination, I conjure a scene of my father meeting York.

It’s late at night, after a holiday party at my dad’s house. With whiskey glasses in hand and cigars, sitting at the dining table after a celebratory meal, plates cleared, Billie Holiday singing softly in the background.

My father would say “What was it like, going on the Corps of Discovery?” excitement, curiosity, his eternal wonder at history filling his voice.

And York would say “They only wrote down a tiny bit. And the best parts, they left out.”

My father would say “What parts?” and York would say “Let me tell you….” And they’d be off and running.

As Janina Edwards shares, it is important to recognize that history as it’s been written hasn’t included all perspectives. With this in mind, the National Park Foundation is proud to work with partners like Outdoor Afro to expand the perspectives and stories shared through national parks. Our national parks are living testaments to the expansive and ever-evolving story of this country, reflecting the contributions of all communities and are places where all people should feel welcome and connected. 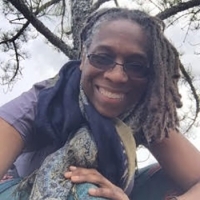 We invite you to learn more about the work of Outdoor Afro and their Leadership Training program to discover how you can support volunteer leaders like Janina.

Janina Edwards is an Outdoor Afro leader in Atlanta, GA. She writes short story fiction and memoir/personal essay pieces focused on her life experiences, especially interactions in nature, and as a caregiver for her parents.

She just recently jumped into paddling, and within a few months, kayaked more than 100 miles on the Missouri and Mississippi Rivers during the Blackpaddle Expedition.