National parks across the country preserve and share stories of trailblazing women who dared to imagine a different future, and we continue to unearth new stories, contributing to our collective history.

The National Park Foundation (NPF) is proud to support programs and projects that help the National Park Service (NPS) share a more comprehensive and inclusive American narrative that amplifies the voices of women whose vision, tenacity, and resilience moved them to climb mountains, burst through barriers, protect the environment, and lead social movements that changed history forever. NPF grants, including those from our Women in Parks initiative, have been distributed to parks across the country to help highlight women who made history and those who continue to shape our future – because every park has a connection to women.

Join us in exploring just some of the places and NPF projects that share the stories of women throughout our multi-faceted history. 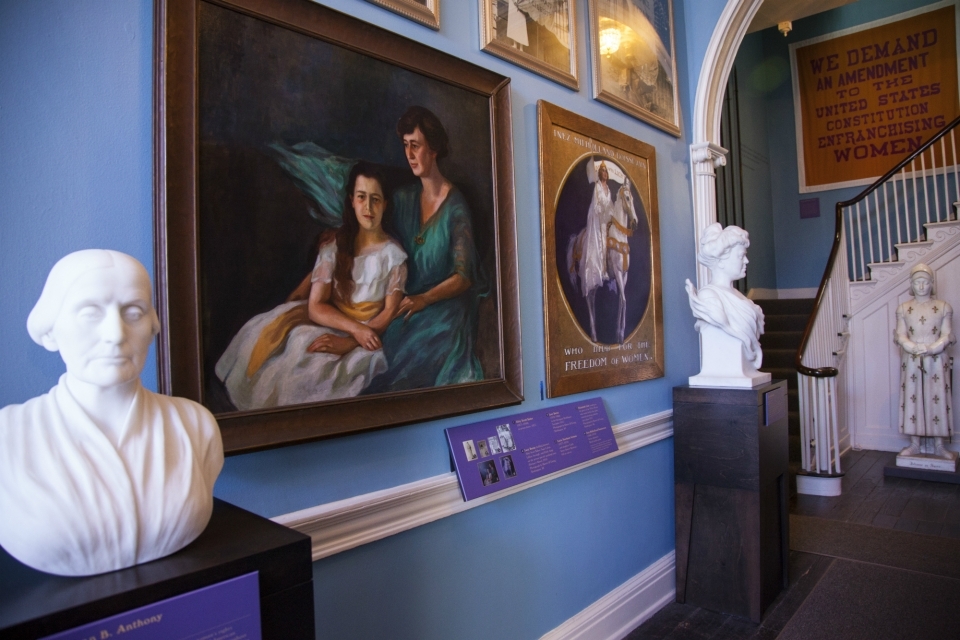 Belmont-Paul Women’s Equality National Monument was the epicenter of the struggle for women’s rights for nearly 90 years as it served as the headquarters of the National Woman’s Party (NWP), founded in 1916 by Alice Paul. When the 19th amendment was ratified in 1920, it still denied voting rights to women of color and women with lower incomes were often turned away from polls, and advocates such as Ping-Hua Lee, Mary Church Terrell, Ida B. Wells, and more, pushed for greater equality. At the home, NWP continued to push for women’s rights, eventually establishing the World Women’s Party in 1938.

When the park was designated in 2016, NPF announced a gift from businessman and philanthropist David M. Rubenstein that funded critical repairs and restoration of the building, including repairs to the building's HVAC system, chimney, roof, gutters, and windows. A 2020 NPF Women in Parks grant was made to the park to help preserve in perpetuity the National Woman’s Party’s collections of more than 2200 objects that share the stories of advocating for women’s equality. 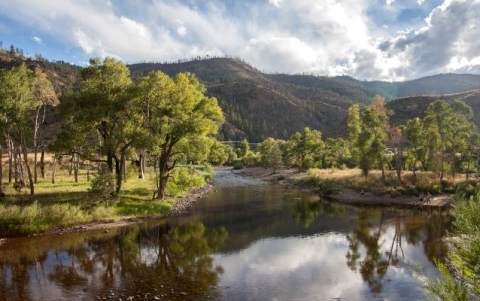 Cache la Poudre River National Heritage Area is one of 55 National Heritage Areas throughout the country and was the first to be established west of the Mississippi. Extending 45 miles along the Poudre River, this park preserves the rich history of the area. The Northern Arapaho lived in the river’s basin for centuries before they were forcibly removed by the U.S. military in the 1870s. Later, settlers built irrigation ditches and canals, many of which are still in use and can be seen by visitors today.

A 2020 Women in Parks grant from NPF supports the “Lifting Voices from the Shadows” project at the park. The project records and archives the personal experiences of Northern Arapaho women, including their personal experiences with voting and contemporary issues. Their stories will be used to create online content such as educational videos and webinars, as well as future in-park programming including guided walks, and special talks and events. 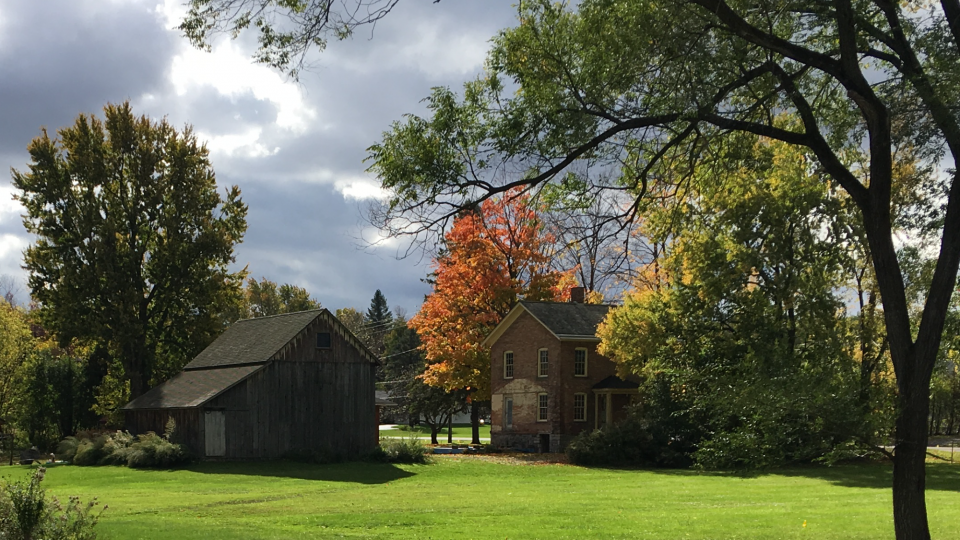 Harriet Tubman was known as the “Moses of her People” for leading more than 300 people out of slavery and her extraordinary work with abolitionist causes, Harriet Tubman’s heroic efforts. Visit the site where Tubman lived and worshiped, caring for family members and other people who were formerly enslaved and seeking safe haven in the North. Harriet Tubman National Historical Park explores these later years of Tubman’s life, where she helped establish schools for people who were formerly enslaved, advocated for equality and suffrage for African American women, and established the Harriet Tubman Home for the Aged.

NPF helped establish this park in 2017 by facilitating the acquisition and transfer of the historic Thompson Memorial African Methodist Episcopal (AME) Zion Church. As part of NPF’s African American Experience Fund and with the support of the Fund II Foundation, NPF will support the repair and restoration of the Thompson Memorial AME Church, so park visitors will be able to experience the building as Tubman would have. Additionally, one of twelve interns in the internX program, Journee Harris, served as the Interpretative Development Assistant Intern at the park – a position made possible through a 2020 partnership between NPF, Greening Youth Foundation, NPS, and the Fund II Foundation. 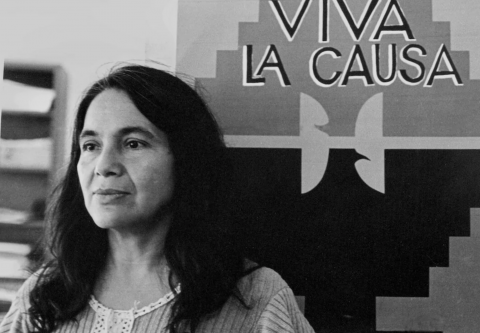 César E. Chávez National Monument honors the life and work of César E. Chávez, a farm worker and community organizer who dedicated his life to the struggle for respect and dignity of America’s farm workers. The park also honors the work of Dolores Huerta who, with Chávez and Larry Itliong, expanded the United Farm Workers of America (UFW) from its roots as a union for farm workers to act as a national voice for the underpaid and disenfranchised. Huerta was a 25-year-old schoolteacher when she became an organizer with the Community Service Organization (CSO) alongside Chávez. Throughout her career, Huerta has led strikes, organized boycotts, and lobbied state and national lawmakers, continuing to fight for the rights of farm workers and the equal treatment of women and underrepresented people.

NPF supported the park’s operations for its first year, and in 2015, NPF helped 130 fourth grade students travel to the park through our Open OutDoors for Kids program. A 2020 NPF grant, part of our Women in Parks initiative, supported the research and documentation of the experiences of Mexican, Filipina, and Chicana women farm workers in California, highlighting their role in the historic movement sparked by Chávez and Huerta. 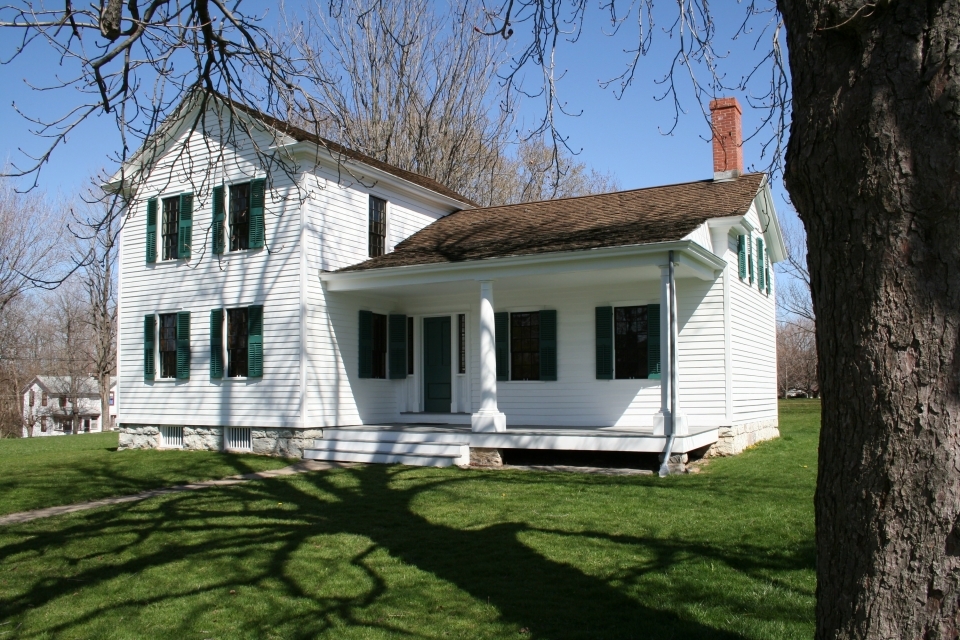 The site of the first Women’s Rights Convention in July 1848, Women's Rights National Historical Park honors the beginning of the women’s suffrage movement and those who lent their voice to the cause, including organizers Elizabeth Cady Stanton and Mary Ann M’Clintock. It was here that the Declaration of Sentiments was penned and signed, stating that “all men and women are created equal.” The convention was a crucial and formal beginning of a movement in the United States that grew rapidly, demanding social, political, and economic rights for women.

A 2020 Women in Parks grant from NPF is helping to create future programming for the park about the women’s suffrage movement while recognizing its complex and interwoven nature with civil and political rights for all Americans. With these new resources, the park will be able to share diverse stories and the complicated legacy of the women’s suffrage movement in the very place where it began. 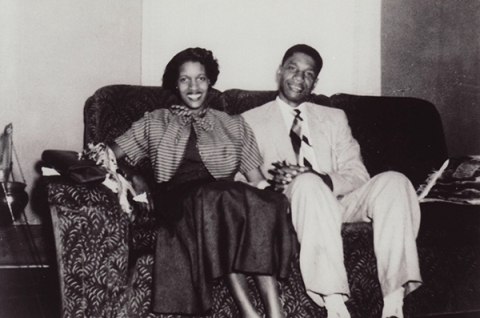 Medgar and Myrlie Evers Home National Monument commemorates the legacies of Medgar and Myrlie Evers, civil rights activists who devoted their lives to ending racial injustice against Black Americans through local and national activism. Medgar and Myrlie opened and then managed the first NAACP Mississippi State Office and lived under the constant threat of harm as they led boycotts, organized voter registration drives, and investigated acts of violence against African Americans. Medgar Evers was murdered in the carport of their home on June 12, 1963, and since then, Myrlie has continued her activism, becoming one of the first African American women to run for Congress and eventually serving as chairwoman of the NAACP.

NPF was instrumental in establishing this monument in 2020. Through a grant to NPS, NPF was able to provide the funds necessary to acquire the Evers’ property from Tougaloo College and transfer it to NPS. Once open, the park will be an important educational site that shares the stories of Myrlie and her husband Medgar, reminding us of our past and building a hopeful message for the future.

During World War II, a labor shortage on the home front opened the door for women and minorities to enter the workforce, a crucial turning point in the struggle for equal rights. Women who worked in the defense industry became known as “Rosie the Riveters,” named after a popular 1942 song. Throughout the war, six million women entered the workforce, and “Rosie the Riveter” and her “We Can Do It” motto came a national symbol. The period also resulted in the largest number of people migrating within the U.S. in the history of the country, and “boom towns” grew at phenomenal rates around industrial centers. Rosie the Riveter / WWII Home Front National Historical Park is located in Richmond, California, one of these towns which featured featured one of the most productive shipyards in history during the war.

In 2018, NPF supported the park’s role as a community resource partner for Richmond's Straight Talk On Prison's Community Works Program. The park was able to provide information to program participants on public service careers, such as working at the park or for NPS. 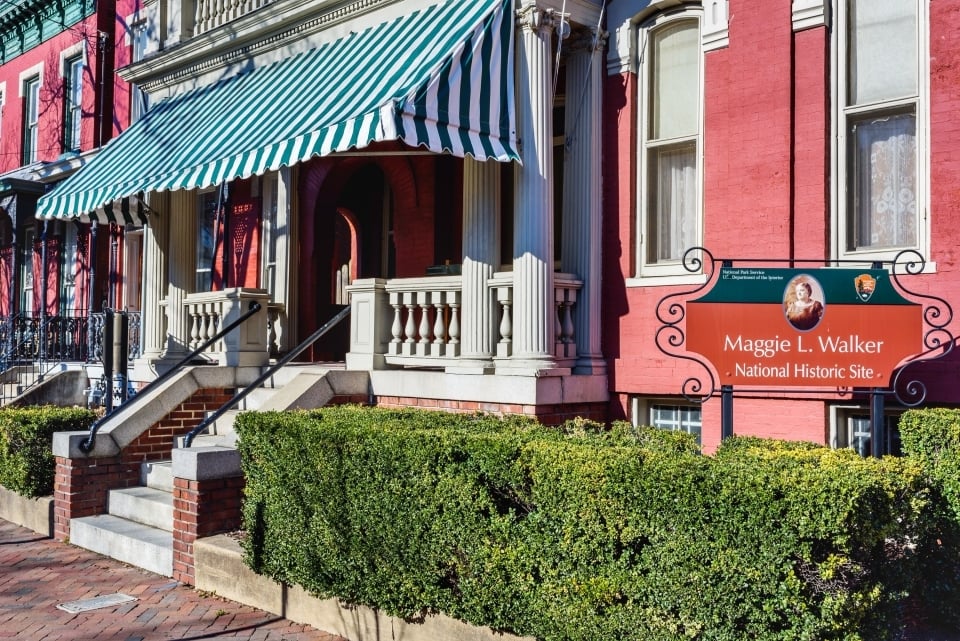 The historic home of Maggie L. Walker in Richmond, Virginia is a place of pride and progress. A staunch supporter of rights and opportunities for African Americans and women, Walker was a prominent businesswoman and community leader. Throughout her life, she was a newspaper editor, fraternal leader, and the first African American woman to establish a bank in the country. Maggie L. Walker National Historic Site preserves Walker’s residence of 30 years, restored to its 1930s appearance with original Walker family pieces. Visitors to the park today can learn about the Jackson Ward community where Walker lived and worked, as well as tour the historic home as it would have appeared during Walker’s lifetime.

A 2020 Women in Parks grant from NPF funded the archival appraisal of the records from Independent Order of St. Luke, which will be donated to NPS and the park. Walker took charge of the Order in 1899 and helped it grow from a burial society to a fraternal order and life insurance company, increasing its membership, financial security, and business ownership. 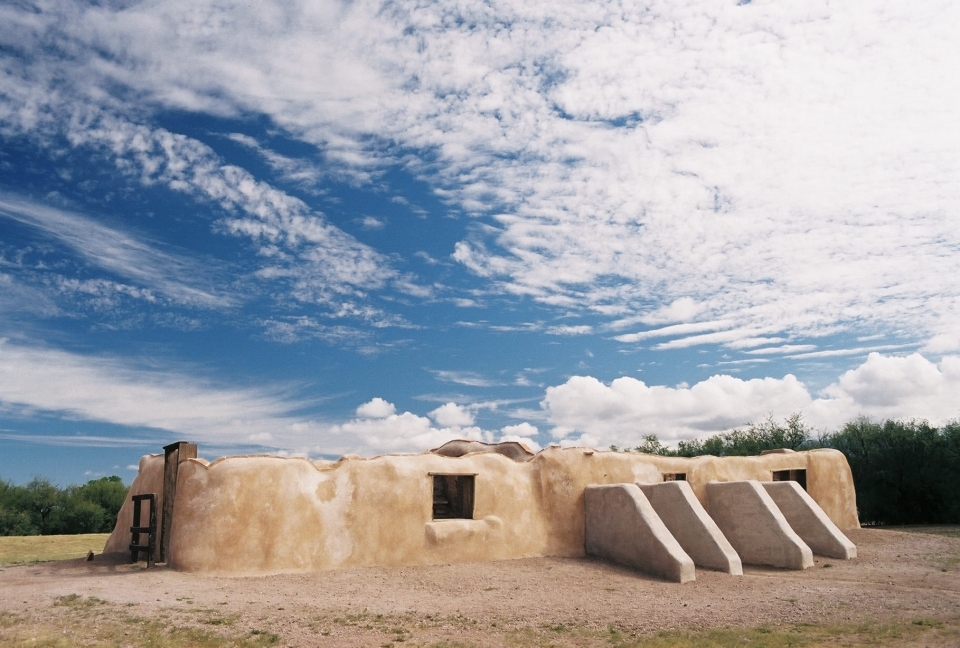 Nestled in the Santa Cruz River valley, Tumacácori National Historical Park preserves a wealth of cultural histories, including the Spanish colonialist, O'odham, Yaqui, and Apache people who all called the Santa Cruz River valley home. The meeting of these various cultures – both in cooperation and in conflict – created vibrant cultures and traditions that continue to live on. Visitors to the park today can enjoy a self-guided tour of the mission grounds, where a three-story adobe church once stood, as well as a hike along the Santa Cruz River, the waters of which supported both the O'odham civilization and later, the mission community.

A 2020 Women in Parks grant from NPF supported hiring a bilingual intern to research and interpret Mission records to expand storytelling at the park and online. Dorien Scheets combed through handwritten archives, including the records of baptisms, marriages, estate sales, and lawsuits, to explore the role of women living in the area during the Spanish colonial era and their contribution to the culture of Mexican, O'odham, and Yaqui communities that exist today. 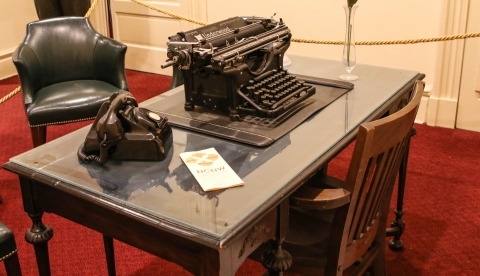 Mary McLeod Bethune Council House National Historic Site preserves the story of Mary McLeod Bethune, an advocate for women’s rights and civil rights. Bethune founded Bethune-Cookman College in Florida and served as an advisor on African American affairs to four presidents. She was appointed the Director of Division of Negro Affairs of the National Youth Administration by President Roosevelt, making her the first African American woman to hold so high an office in the federal government. It was in this house, now preserved by NPS, that Bethune and the National Council of Negro Women strategized and developed programs to advance the interests of African American women.

A 2020 grant through NPF’s African American Experience Fund supported the Bethune Leadership Institute for Boys and Girls, using Bethune’s story to teach a group of 20 young boys and girls about leadership. Focused around the historical example of Mary McLeod Bethune, the participants took field trips to the historic site and other parks protected by NPS.

With over 420 national parks across the country, there is a wide variety of women’s stories to tell. The National Park Foundation is dedicated to supporting, uncovering, and amplifying these stories in parks, as well as championing the women in our parks today who work to protect these treasured places – from all-women service corps crews maintaining trails to Mellon Humanities Fellows whose scholarship expands, enhances, and deepens storytelling in our parks.